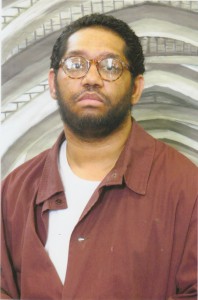 I’ve always been an artist, as a kid I’d draw and my eyes (mind) was/is very sensitive to visual stimuli. I was also encouraged by my family and school art teachers and comic books, etc.; prior to my crime and incarceration, I had drifted away from art and into the street underworld: drugs, drug selling, weapons, sex, violence. In retrospect I went through a process of intense spiritual death that culminated in my killing another human being and being sentenced to a LWOP (virtual) death sentence.

In prison initially I was unable to adjust, primarily because I hadn’t been institutionalized in juvenile facilities where you are trained/conditioned to be/accept incarceration. I believed almost the exact opposite: as a “criminal-outlaw” it was my duty to attempt to “break out,” which I unsuccessfully tried. I was charged up and put in the hole for my last attempt in ‘96 and that was when the real “work” began–I got serious about resurrecting my skills, which had been dormant from not practicing, I would write/draw all day and I would meditate and visualize my past. I needed to understand what put me here and how I could free my mind and body and spirit. I would read the revolutionary hieroglyphs of the past–photocopied pages of Malcolm X’s writings and others … I was in my earliest stage of all forms of personal retransformation, a lot of this began in a hole (RHU) in Huntingdon penitentiary–my motivation was my survival as a human being and the hope of freedom. Artistically, my development was accelerated because I could draw only with inkpens–I couldn’t erase and I had very little to copy from, so I had to draw what was in my mind and what I saw. These are difficult, but they’ve paid off in the long run. I can’t even imagine what my life would be like in prison if I didn’t do a lot of internal work on myself in that hole then. Now, I not only have my skills alive, in addition I have my soul … which is unified with my creativity and linked to my politics and struggle (message) and my physical survival ($, food, clothing, shelter, taxes 🙁 ) as a human being.

What role do you think art can or does play in the struggle to end LWOP and mass incarceration more generally?

Art is inseparable from all struggles , not only as propaganda but as a motivator to struggle and as a relax from struggle. Generally, our audience will not be able to read Fanon because of miseducation and other social barriers, but they can be introduced to Fanon’s ideas via pictures and music and video etc; (dance, comedy), so art can condense huge ideas into consumable bites. Art can also, in a non-threatening, non-religious, DIY-way attract attention and participation from large sections of society. Sadly art isn’t used well enough by the movement, but we’re getting there.

I like the way you lay out the five step process you use for supporting each other and solving problems on the inside (it also feels very similar to our approach on the outside). Steps 4 and 5, as you lay them out, are “4) we persevere and win, and 5) the whole thing repeats.” What do you think it would take to break this cycle where as soon as one victory is won the prison finds another way to punish people or place obstacles in front of their individual and collective development?

In order to have sustained victories and delay the countermoves of the state, we need a freedom culture–we need freedom values and institutions. This involves mutating the definition(s) of what prison – or prison culture – values/objectives are. This is internally developed and exported into society via art and education. This must be creative and massive.

In order to have sustained victories and delay the countermoves of the state, we must:

What do you think has caused the current conditions of mass imprisonment? Why has the broader public allowed it to happen, and who has benefited from it?

The immediate causes for mass imprisonment in the U.S. are” Racism (backlash from counter-culture/civil rights/Black Power etc. movements, Economics–deindustrialization. Gentrification–concentrating poverty in areas. Political and law enforcement policy–enforcing laws on targeted groups. Massive importation of cocaine into America and availability of guns to unlicensed users and persons engaged in criminal acts. Along with these is slavery, which America has never abolished and almost never even talks about. Mass incarceration is the modern extension of American slavery. Everyone, except Blacks and Hispanics and poor whites, benefits from it. And it’s “allowed” to happen because the ideas that American slavery is founded upon have never been dismissed. White supremacy is still the ‘founding thought’ of this society’s masses. This society needs Black inferiority to survive, this is the ‘order’ that other values line up with.

You write that “the current system is shrouded in mystery because it cannot operate in sunlight.” Can you say more about this?

If the curtain is removed, society will see the lies and refuse to accept the inequality. The PA DOC spends $2 billion dollars on a warehouse for death penalty cases, lifers doomed to die inside and a 60%-70% recidivism rate, you know this, but society believes that prisons protect them from ‘bad men,’ rapists, murderers, child molesters. Does it take 2 billion dollars to do that? When the vast majority of inmates are nonviolent??? It’s bullshit that people believe because the lie is constant and internally people believe very bad things about themselves and others, this also must come into the sunlight, dishonesty and conspiracy are key elements in the formulas of systemic oppression. We need everything out i the open, then we can begin.

How would you respond to those individuals who argue that highlighting the voices of those who have been convicted of crimes harms victims?

Speaking of “sunlight,” the Office of the Victim Advocate should open up the millions of dollars they collect and hold from fines/fees. This is a racket, the state warehouses inmates and hoses them with the millions of gallons of victims tears, while counting the bucks. I’d call it PA. Pain for Profit_A State Revenge Initiative. We’re all victims, when criminal acts are committed in robs everyone of a positive opportunity to live and be happy, not just one person or particular group of “approved victims.” We need to expand our definition of ‘victim.’

My family was in a state of dysfunction prior to my incarceration and my incarceration has mostly negatively impacted my family and my community. Most importantly, by removing adults and adult men/males from communities thereby promoting fatherless homes and enabling dysfunction in families. Also, by decreasing census numbers and consequently federal funds for our communities by counting inmates as “residents” of rural counties.

What song would you want to be the soundtrack to your story?

My soundtrack would be infinite because I love music almost as much as I love art… :). Shout out to WPRB Princeton (FM) 103.3 playing everything, jazz, blues, gospel, hip-hop, reggae, EDM, rock, folk etc; but a song to pick one (which is not cool) would be “Keep on Pushin’” by the late and great Curtis Mayfield, close second is “You gotta get down” by War, close third “Jungle Land” by Bruce Springsteen, close fourth, three-way tie “Footsteps” (Wayne Shorter), “Blue Monk,” Thelonius Monk, “We got the jazz,” A Tribe Called Quest. THis is the worst question for me! 🙂

If your voice could be heard anywhere, where would you want it to be heard?

I’d like my voice to be heard, especially when I’ve got something constructive to say to be heard in:

I’d love to incorporate some visuals and if there was a way, I’d use a lot of archival/historical powerful imagery and original art and edited film clips/soundbites…even text imagery, possibly some animation.